A Crystal Lake plastics producer has registered record earnings despite sales dropping more than $50 million from a year ago. 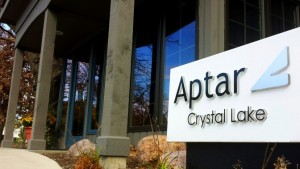 The maker of international plastic products also reported a dip in sales of 9 percent in the fourth quarter compared to the same time in 2014. AptarGroup’s sales fell from $599 million to $547 million in the quarter. The drop was attributed to softening markets and foreign currency headwinds, according to AptarGroup President and CEO Stephen Hagge.

He noted that when excluding the effect of currency exchange rates, the firm recorded a 1 percent hike in core sales during the quarter.

“Despite several challenging conditions, including softness in several markets, we performed very well operationally,” Hagge told the Northwest Herald. “We achieved record fourth-quarter earnings driven by operating margin improvements across each business segment compared to a year ago.”

The biggest drop in fourth-quarter sales for the company came in the AptarGroup Beauty + Home division, which saw sales fall 12 percent to $303 million. Hagge said a softening personal care market was to blame. Despite the drop in sales for the quarter, Hagge said, the Crystal Lake business did record a year-over-year increase for the fourth quarter of 2015.

However, Hagge noted, operating margins improved across all business segments.

AptarGroup’s earnings margin before interest, taxes, depreciation and amortization, was 19 percent for the fourth quarter, up 2 percent from a year ago.

“While we continued to benefit from lower input costs, we also remained focused on containing costs and improving operating efficiencies across each segment,” Hagge said.

Hagge said in 2016 the company will focus on containing costs to meet altering market conditions. The Crystal Lake firm will also expand its airless dispensing products with the $218 million acquisition of a Germany-based company in the first quarter, the AptarGroup CEO noted.

Sansone Accounting & Tax provides this information as a community service. Sansone is a provider of accounting and QuickBooks services and is known for guiding clients through planning and preparation decisions to minimize tax liabilities and help increase their business efficiency. Whether it is transitioning to QuickBooks or lowering business taxes, the firm prides itself on being available to play a major role in financial, record-keeping and tax-planning issues. To schedule an appointment with one of Sansone’s certified public accountants, call (815) 459-4300.