Joe Affrunti travels the world, seeking to make it on the professional golf scene.

From Argentina to California, the Crystal Lake native is working to blaze his own trail. However, as hard as he works on tour, he tries to carve out time every morning and evening to connect with his son, Jack, via FaceTime. The 22-month-old has been a grounding influence for the golfer. 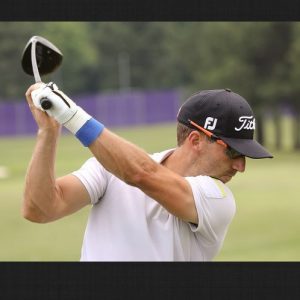 “With Jack, life on tour has been less strenuous,” the former Crystal Lake Central golf star told the Northwest Herald. “He loves FaceTime. It”s the greatest think ever. We try to connect every morning and evening. He’s ready to party first thing in the morning. He wants to eat dinner, so he’s not as eager on the iPad then, but he’s a riot at dinner to be around.”

“There’s a fine line between caring and not caring, and I seem to have found the balance better with my son at home,” said Affrunti, now a resident of Scottsdale, Ariz. “He doesn’t care if it was a good round or bad round, he just wants to see ‘da-da.’ It used to be if I had a bad round dinner would taste terrible and breakfast the next day too. But Jack is hilarious. Being a dad is the best.”

Affrunti has been on the PGA and Web.com tours, as well as the PGA Tour Latinoamerica. The 35-year-old is considered a PGA Tour rookie because of time missed due to injuries.

The St. Jude Classic, played the weekend of June 11-12, was the last start Affrunti received as part of his medical extension that goes back to his 2011 debut. So far this year, he has earned $64,909. That was gained through a career-best, tie for 20th at the Zurich Classic of New Orleans in May. He would likely have to finish in the top five at the St. Jude tournament to earn enough money keep his PGA Tour status. He shot a 4-over par 74 the first day of the tournament and was tied for 115th.

Affrunti has undergone both hip and wrist surgeries since his 2011 emergence on the PGA scene. He said he still has a hip issue so he limits his time on the driving range and travels with an ice-compression machine. It is “an absolute necessity,” Affrunti said.

He spends most of his practice time on chip shots near the green.

“On Wednesday (the day before tournaments start), I chip and putt to keep my hands awake,” Affrunti said. “I just rest my body knowing I’ve got the week to play, because (injuries) are what’s given me issues most of my career. I ice my hip, hands and forearm. Some guys are range rats who hit as many balls as possible. I physically can’t do it anymore so I keep my hands awake for chipping and putting and if that’s there I’ll have a great week.”

Sansone Accounting & Tax provides this information as a community service. Sansone is a provider of accounting and QuickBooks services and is known for guiding clients through planning and preparation decisions to minimize tax liabilities and help increase their business efficiency. Whether it is transitioning to QuickBooks or lowering business taxes, the firm prides itself on being available to play a major role in financial, record-keeping and tax-planning issues. To schedule an appointment with one of Sansone’s certified public accountants, call (815) 459-4300.