A Crystal Lake native has been named one of the anchors of ABC 7’s “Eyewitness News at 4 p.m.” 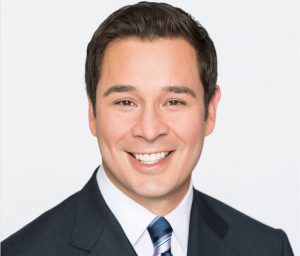 Elgas will begin as co-anchor on ABC 7’s 4 p.m. newscast on May 26, the same day that Alan Krashesky will take over anchoring the 5, 6 and 10 p.m. newscasts after Ron Magers’ retirement on May 25.

Elgas joined ABC 7 as a reporter and fill-in anchor July 7.

“Since joining our news team, Rob has done an outstanding job for us,” Graves said. “He’s a Chicago area native who relishes covering news in and around Chicago and has forged a real connection with viewers here. His on-air warmth, experience and enthusiasm for his work are the same qualities that have made him such as integral part of our newsroom this past year.”

The Crystal Lake native has more than 20 years of news experience. He joined ABC 7 after anchoring the early afternoon news for NBC 5. He also did reporting for NBC 5’s late evening news. The longtime journalist most recently won an Associated Press and Peter Lisagor Award for his live news coverage of the 2014 protests in Chicago. He has also won Emmy awards as co-host of various specials, including a 2006 Winter Olympics special titled “Hometown Hopefuls.”

Prior to returning to Chicago in 2002, Elgas worked for ABC 7 in El Paso, Texas. Hired in 1998, he was a weekend anchor before co-anchoring the station’s morning news show from 2000-02.

He started his broadcast career behind the lens in Champaign-Urbana, working as a photographer for WICD-TV. Elgas attended the University of Illinois, studying agricultural communications and journalism before landing his first job in television.

He is a member of the National Association of Hispanic Journalists. Born in Arlington Heights and raised in Crystal Lake, Elgas now lives in the southwest suburbs with his wife and two children.
Sansone Accounting & Tax provides this information as a community service. Sansone is a provider of accounting and QuickBooks services and is known for guiding clients through planning and preparation decisions to minimize tax liabilities and help increase their business efficiency. Whether it is transitioning to QuickBooks or lowering business taxes, the firm prides itself on being available to play a major role in financial, record-keeping and tax-planning issues. To schedule an appointment with one of Sansone’s certified public accountants, call (815) 459-4300.