Four crooners are set to provide area residents with holiday tunes and plenty of style.

“Plaid Tidings” is being presented on select weekends in December and early January at the Raue Center for the Arts in Crystal Lake. 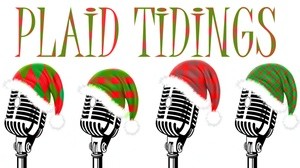 Plaid Tidings features Joel Bennett as Frankie, Roy Brown as Sparky, Chris Davis as Jinx and Ryan Dooley as Smudge. The quartet comprises the Four Plaids, singers who were killed in a car crash on the way to a show, the premise of their prior production, “Forever Plaid.”

They return to earth from heaven, but aren’t sure why they are back. A telephone call from Rosemary Clooney informs them that their mission is to spread holiday cheer to the world and make things right.

“Here, they are coming back again for a magical appearance,” associate producer Pat Henderson told The Courier-News. “This set is more like a Christmas special for an old-time TV show. And it’s not decorated totally within the first act, but in the second act it’s more decorated.

“They still do a lot of those tunes like “Sh-boom” and “Stranger in Paradise,” but they manage to put a little more Christmas flavor into things and are sharing their Plaid Tidings with everyone.”

Henderson said the cast is first-rate.

“No pun intended, but my cast – I feel like I’ve died and gone to heaven,” she said. “These guys are amazing. Each character is very unique and different, just as a quartet would be. I got the dream cast. My music director is Linda Madonia, and she is amazing. She’s just fabulous. And Mark Mahalick (the director) is doing choreography, so I kind of hit the dream production, team and cast lottery.”

Henderson said the show is fun and sweet, with characters who are real.

“They were truly friends when they were kids growing up,” she said. “They had a shared dream and there are poignant moments in it. There’s also the fact of getting you into the Christmas spirit and having a lot of fun with that, of taking tunes and making them into Christmas carols but then doing traditional Christmas carols. One of the numbers is called ‘Psycho Christmas.’ They do 12 or 13 parts of Christmas carols that flip within a line and a half of each other.”

Henderson said the production is a way to spread holiday cheer.

“One of their idols was Perry Como,” and they loved his TV specials, Henderson said. “Not to give away surprises, but sometimes dreams do come true.”

The show includes pop songs from the 1950s and ’60s, as well as traditional holiday songs such as “Let It Snow” and “Have Yourself a Merry Little Christmas.” The crooners also provide a second version of “The Ed Sullivan Show,” including the Rockettes, the Chipmunks, The Vienna Boys Choir and a Plaid Caribbean Christmas.

“It’s one of those feel-good for everybody musicals,” she said. “It’s very funny too. But the music is just beautiful. It’s magic. This is a show that everyone in the area would enjoy.”

Sansone Accounting & Tax is a provider of QuickBooks and accounting services. Sansone is known for guiding clients through planning and preparation decisions to minimize tax liabilities and help increase business efficiency. Whether it is questions about QuickBooks or new business taxes, the firm prides itself on being available to play a major role in supporting financial, record-keeping and tax-planning issues. To schedule an appointment with one of Sansone’s certified public accountants, call (815) 459-4300.