An Illinois soldier will be laid to rest 46 years after he went missing.

The remains of Staff Sgt. Kenneth Leroy Cunningham of Ellery, Ill., who had been missing since Oct. 3, 1969, while on a reconnaissance mission in South Vietnam, will be buried Thu 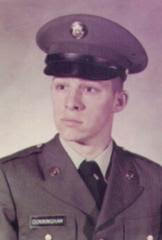 His remains were flown back to the United States and arrived in Louisville, Ky. on Tuesday.

Flags at Illinois post offices, including Crystal Lake, are at half-staff in honor of Cunningham.

The solider, who was 21 at the time of his disappearance, had been listed as missing in action since the Vietnam War.

While on missing-in-action status, Cunningham was promoted from private first class to staff sergeant and later declared “dead, body not recovered.”

On Oct. 3, 1969, Cunningham was assigned to be an observer-crew member aboard an OV-1C aircraft that left Phu Hiep, South Vietnam, during the early evening. Cunningham and the pilot, 1Lt. Paul L. Graffe, were conducting nighttime infrared surveillance on targets in the tri-border area of Cambodia, Laos and South Vietnam, but failed to return. The last radio contact wit

h Graffe and Cunningham was at 6 p.m. when they informed another OV aircraft that they were going to continue their mission for about 30 more minutes and then begin the return trip to Phu Hiep.

When they did not return as scheduled, Search-and-Rescue efforts were initiated and on Oct. 5, 1969, a SAR aircraft located OV-1 wreckage atop a 7,000-foot mountain peak north of Kon Tum, Vietnam.

Efforts to land a search party were not successful due to inclement weather. Further Search-and-Rescue efforts were abandoned due to hostile activity in the area. On Oct. 7, 1969, another effort was made to land a Search-and-Rescue team, but it was determined that the wreckage was moved and could be a trap.

Laboratory analysis established the remains as those of Staff Sgt. Cunningham.

The P.O.W. Network notes that the OV-1C aircraft was designed as a battlefield reconnaissance aircraft and was used primarily by the U.S. Army. The various models were outfitted with different detection equipment. The standard aircraft was not armed, but some carried various weapons. The C model featured infrared detection equipment and a forward-aimed camera. Because the North Vietnamese and Viet Cong relied heavily upon darkness to conceal their activities, the infrared sensor proved especially valuable.

Graffe is still listed as missing in action.

Graffe and Cunningham were among nearly 3,000 Americans who were missing, prisoners or unaccounted for in Southeast Asia at the end of the Vietnam War. The P.O.W. Network noted that unlike other missing-in-action from other wars, most of the men who served in Vietnam can be accounted for.

“Tragically, more than 10,000 reports related to missing Americans in Southeast Asia, have been received by the U.S. government, convincing many authorities that hundreds of men are still alive in captivity, yet freedom for them seems beyond our grasp,” the P.O.W. Network said.

Sansone Accounting & Tax provides this information as a public service. Sansone is known for guiding clients through planning and preparation decisions to minimize tax liabilities and help increase business efficiency. Whether it is questions about QuickBooks or new business taxes, the firm prides itself on being available to play a major role in supporting financial, record-keeping and tax-planning issues. To schedule an appointment with one of Sansone’s certified public accountants, call (815) 459-4300.